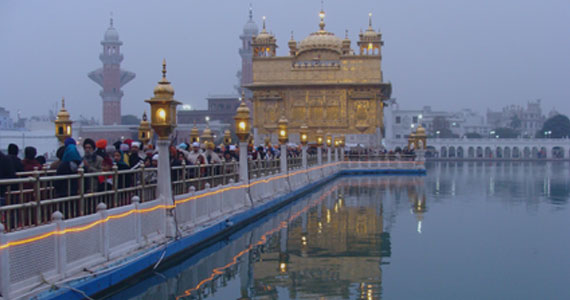 The founder of the Sikh tradition, Guru Nanak, was born in the region of Punjab, South Asia, in 1469 CE. He lived a life of spirituality, service, and honesty, and the disciples who began to follow his teachings came to be known as Sikhs. The Sikh community grew under the guidance of ten religious leaders — gurus — the last of whom passed away in 1708 CE. The authority of the community today rests with two entities — the Sikh scriptural text known as the Guru Granth Sahib, and the community of initiated Sikhs, known as the Guru Khalsa Panth.

The Sikh scripture is referred to as the Guru Granth Sahib and holds ultimate authority within the Sikh tradition. The text was compiled by the Gurus themselves and contains their musical writings. The Gurus also incorporated writings from other spiritually elevated figures who lived in South Asia and shared a similar outlook. The themes of the scriptural compositions have largely to do with the nature of divine experience and the steps one can take to achieve it.  The entirety of the text is written in verse poetry, and a vast majority of it is set to music.

Sikhs consider the Guru Granth Sahib to be a revealed text, and it plays a central role in Sikh devotional and ceremonial life. The scripture, which is relatively large in size, is the centerpiece of Sikh worship spaces. The gurdwara is modeled after an imperial court in early modern South Asia, which helps remind worshipers of its sovereign and authoritative status. The Guru Granth Sahib is placed on a throne, and a volunteer attends to it. All Sikh life-ceremonies incorporate the scripture in some way as well. For example, at a Sikh wedding, the bride and groom walk around the Guru Granth Sahib multiple times in order to, among other things, illustrate symbolically the centrality of the teachings within their own lives.

Each of the ten Sikh Gurus worked to nurture the Sikh community, and over time, the community underwent its own growth of responsibility. It went from bearing a small amount of influence during the time of Guru Nanak to being consulted by the Sikh Gurus in major decision-making moments. The community’s influence culminated in 1699 CE, when Guru Gobind Singh, the tenth Sikh Guru, called on all Sikhs to gather in the city of Anandpur on Vaisakhi, the day that traditionally marked the celebration of the harvest festival.

It was on this occasion that the community of initiates was formally institutionalized and given authority. This community, which would come to be known as Guru Khalsa Panth, provided an official structure for those individuals committed to the Sikh way of life. One demonstrates this commitment by accepting initiation (amrit) and adopting a few of the basic practices that have come to be articulated in the Sikh code of conduct (Rehat Maryada). The prescriptions in this document call on initiated Sikhs to, among other things, engage in daily prayers and wear five articles of faith.